We’re paying homage to legendary designer Yves Saint Laurent, who died on June 1 of brain cancer. Over the years, Iman, Catherine Deneuve, and Laetitia Casta have all modeled for him. I remember growing up seeing “YSL” everywhere, in the news, magazine ads and my mother’s and grandmother’s closets. It seems as if he’s been with us forever. 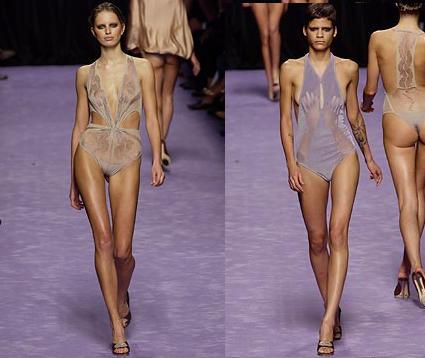 Long known for creating “ready-to-wear,” YSL was a force of design throughout his career. At the age of 21, he was called upon to save the struggling house of Dior. It worked and since then YSL has continuted breaking ground both in both design and soceity. YSL was the first designer to use black models on the runway, and according to wikipedia, he popularized fashion trends in the 1960s and 1970s “…such as the beatnik look, safari jackets for men and women, tight pants and tall, thigh-high boots….” 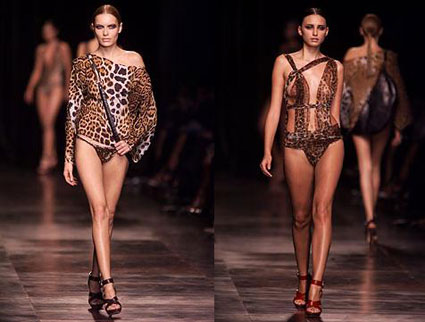 Swimsuit images on this page are from his YSL 2002, 2003 and 2004 ready-to-wear runway shows. Take a moment to enjoy his design influence on us and fashion! 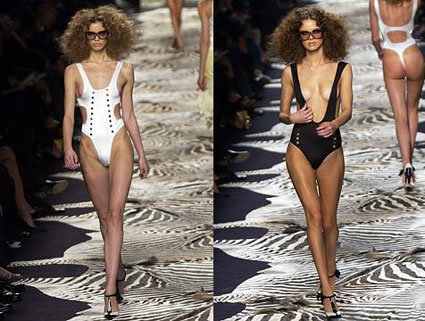 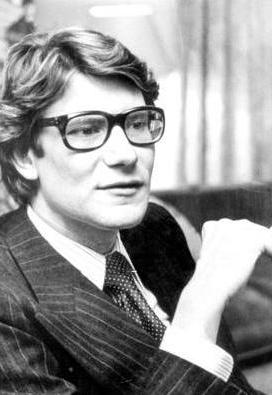 “The most beautiful clothes that can dress a woman are the arms of the man she loves. But for those who haven’t had the fortune of finding this happiness, I am there.”
-Yves Saint Laurent, 1983

Ever since the Bond films began in 1962, Bond women have always made an impression. Some of these iconic beauties and their swimwear still have an influence on lingerie and swimsuits today.

Whenever a person mentions swimsuits and James Bond, usually the first image to come up is Ursela Andress as Honey Ryder in Dr. No. The swimsuit was a huge success and, in 2002 Halle Berry wore a modern version of it in Die Another Day. To this day, designers are still inspired by Ursela’s suit and S.P.A.N.X has created a James Bond knicker. Thanks to Knicker’s Blog for first letting us know about S.P.A.N.X’s gorgeous Bond inspired lingerie.

The little black bathing suit has always been a good staple, even for Bond women. This black bikini (with circular hardware on the top) is the front cover of the Thunderball book. When the book came out, it was a popular style, and today you see this design too. Fortunately for us this season, Vitamin A has a Rico Shimmer sleek halter bikini top with ring detail that mirrors the Bond suit.

Goldfinger was a huge hit when Shirley Eaton (as Jill Masterson) died from being painted entirely of gold. In the image, she’s wearing a gold metallic panty. Metallic swimwear and lingerie is hot this year and will be for a while! This season Shay Todd features Bohemian Rhapsody triangle bikini set and updates that unforgettable gold panty.

I can’t end without including Daniel Craig’s Grigioperla swim trunks by La Perla. Thanks to Bond Lifestyle for letting us know where we can find this suit. It could be argued that this one image of Craig did more for James Bond than all the Bond women put together.

If you enjoyed this post, drop me a line. I’m posting a retrospective series called “Intimates over the Years” that highlight lingerie and swimwear that we’ve seen in past films and popular culture that are making a revival today.