Shapeez first appeared on TLP last Spring.  The shapewear brand began with a bra/body slimmer known as the Unbelievabra.  Since the Mini and the Ultimate experienced so much success, Shapeez launched an additional silhouette known as the Shortee, a t-shirt bra that virtually eliminates back bulge and enhances the bustline.

The Shortee uniquely features underwire foam cups and a no-roll curved front to prevent ride up.  Made of breathable, cool-tex lycra, the lightweight Shortee will appear smooth under your snuggest sweaters and your slinkiest shirts.  As with the other Shapeez styles, sizes A – E are available so nearly everyone is included!  This style retails at $75 and is available at Shapeez.com and numerous boutiques throughout North America.  For more information on Shapeez, visit the website. 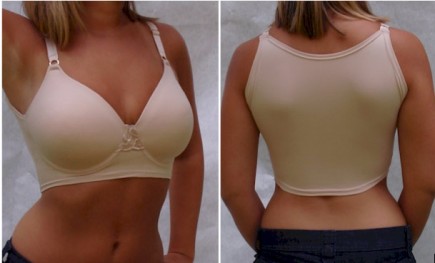 Popular U.S. department store Express is trying out intimates at select locations.  A few years back, Express had a great, affordable collection of basic panties that rivaled Victoria’s Secret’s 5 for $25.  After a while, I didn’t recall seeing them, but now, in its place, is a comprehensive lingerie collection including 4 bra silhouettes, 5 styles of panties, and coordinated sets.With prices ranging from $28 – $32, bras come in convertible, plunge, push-up, and t-shirt silhouettes.  Sizes range from 32A – 36D and are available in an assortment of colors.  Bras can be mixed and matched with the numerous panty styles.

Panty styles include bikini, boyshort, cheeky, hipster, and thong in cotton, mesh, or lace.  Choose from a variety of patterns, prints, and solids.  Prices for panties range from $7.50 to $10.50, but are also available 5 for $25 or 3 for $24 depending on the style.

I plan on trying a few pairs out to see how they compare to my staple favorites – Commando, Cosabella, Honeydew, and Hanky Panky!  Many of the panty styles resemble these popular department store and boutique brands.  I’m also interested in hearing about the quality and fit of the bras as compared to other brands.  They are out of my size range so I’d love to hear about your experiences.  Please share in our forums.  I’m looking forward to hearing your opinions.

The figleaves.com Lingerie Awards received thousands of consumer votes for categories such as â€˜Best Lingerie Brand,â€™ â€˜Best T-shirt Bra,â€™ â€˜Best Sleepwear Brandâ€™ and â€˜Figleaves Favorite,â€™ among others. For the first year, the brands and pieces on the shortlist for voting were pulled from the consumer favorites â€“ the top items that consumers had reviewed favorably on the site throughout the year.

And the winners areâ€¦

Well, I have mentioned my most favorite lingerie shop on here quite a few times. Recently, Kelly reviewed the very comprehensive Lingerie Handbook written by the owner of La Petite Coquette, Rebecca Aspan. Now, I have more praises to sing about this must-visit, New York City hot spot for both celebrities and us ordinary ladies alike.I have always loved the attention paid to customer service at the store. All the sales attendants are attentive, but without being pushy. My trip today was for a fit update. My every day essentials were getting a little worn out and not providing me the level of support I want (and need!). According to the experts, most women are wearing the wrong size bra.

And, as you know, life (i.e. weight loss/gain, pregnancy, birth control, time) can cause changes to your size as well. So, it is a good practice to get re-fit as you noitce changes, or, when you notice a lack of lift.

Back to me. As soon as I entered the store, I was greeted by a helpful sales attendant, Nisha, who asked me a few questions before leading me back to a changing room. She analyzed my current situation and made a few recommendation. She frequently checked to see how each of the bras fit, how I liked them, etc. Before I knew it, she had brought me a few more. After a few tries, I finally settled on the Chantelle Senso. It’s truly amazing how a perfect fit can make a drastic difference. While I love my pretty things, today I was only in the market for the practical. (Although the ones she showed me were very pretty for sure!)

For the smaller busted ladies who just want to find a bra that fits without having to go through the stress of sifting through rack after rack of ill fitting bras in departments stores, Lula Lu has just launched Lula Lu Petites, a new collection of bras designed just for smaller cup sizes, starting at an AA cup.

The Lula Lu Petites collection was developed in line with the feedback received by many of Lula Lu’s store and online customers. Many of these customers had expressed frustration at the sizing of the AA cups currently available on the market, which they felt were inaccurate and too large. As one customer, Stacey, explained, “I want a bra that touches my skin, not one that dents in because there’s so much space in the cups!”

Unlike traditional bra companies who generally use a 34B fit model to determine the sizing of their bras, Lula Lu used a group of AA cup store customers to more accurately determine the fit of the bra cups, especially for the AA and A cup customers. 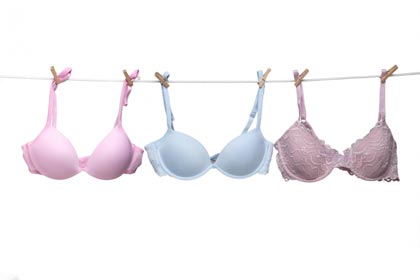 “We wanted to be as accurate as possible when it came to the AA cups so we enlisted the help of our customers, who were more than happy to provide feedback,” comments Ellen Shing, owner of Lula Lu. “We were as frustrated as our customers because we couldn’t fit some of them with the existing AA cup styles on the market so we decided to make our own!”

The first collection of Lula Lu Petites includes three styles, two basic T-shirt bras and a more frou-frou one with lace. Bra sizes start at 30A and one of the styles even comes in a 38AA, an extremely hard to find size. T-shirt bras retail for $45- 48; lacey bra retails for $48. Matching panties and thongs are between $16 – 18 and come in sizes S, M and L. More on lulalu.com!