Miranda Kerr in a dress by a designer I don’t know and in a very very very strange yet sexy swimsuit by “Jets by Jessika Allen”. 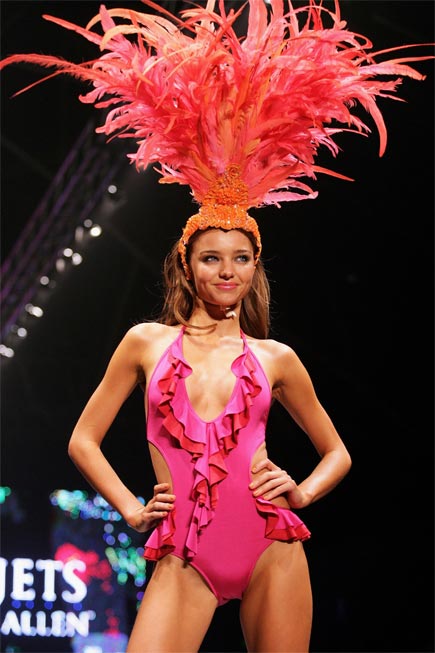 END_OF_DOCUMENT_TOKEN_TO_BE_REPLACED

The swimsuit is so beautiful — the bikini’s not so much in my opinion… 🙂 Enjoy the photos!

END_OF_DOCUMENT_TOKEN_TO_BE_REPLACED

Another Brazilian swimwear label that’s making the crossover to the US and Euro market is Jo De Mer, a luxurious brand aimed at “women with great style who enjoy the life by the sea”.

Jo De Mer has just been added to Nancy Meyer’s stocklist and we’ve got pictures from them — enjoy!

Pamela Levenson, a vintage swimsuit designer, who has worked for Guess? Jeans both in Los Angeles and Paris, has created a gorgeous line of retro bathing suits including one piece, two piece, swim skirts and tankinis. Her boutique is situated in Portland, Oregon but she also sells the designs from her website.

In fact, the new 2008 designs are available online. A brilliant aspect of that collection is the Tankini swimsuits in the nifty “meet and greet” sizing. Ideally the bottom of the tankini should meet and just touch the top of the bottoms to create the appearance of a one piece suit. The Anabel Tankini comes in a range of colours and patterns and is modeled after the 1940’s “sun top tank”. Complete with a sewn-in shelf bra, the tankini has matching bottoms and comes in sizes extra-small though extra-large.

Another adorable feature of the Popina™ collection is the swimsuit skirt, a cute mini skirt made from the same patterns as the other swimwear. The skirt can be worn over the bathing suit in the water and will hold its shape and dry quickly since it is made with bathing suit fabric.

What a timeless and elegant selection of swimwear!

For the past few weeks, TLC (The Learning Channel) has been advertising a new reality show called “Ashley Paige: Bikini or Bust”. So of course being in the biz, I decided that it was important to watch the show last Friday.

I am not fussy on reality shows basically because I believe most of what we see is staged and over dramatic, but like the dutiful little reviewer that I am, I marked my calendar and watched the show.

For those of you like who’ve never heard of Ashley Paige, she is a well-known Los Angeles swimwear designer with her label in all the right boutiques around the world. The only problem is she is not a businesswoman and desperately needs funds to show her line in the Los Angeles Mercedes-Benz Fashion week.

Although I found the show interesting to a point since it was not overly hyped up like other reality shows, I found Ashley Paige to be a curious dichotomy. On one hand her label is worn by A-list clients and can be found in hundreds of shops but on the other hand, she complains about not having manufacturing monies. It behooves me to understand how she got her suits into so many shops to begin with if she has no money. It appears to be one of those catch-22 situations where she needs money to produce swimwear on a grand scale while at the same time her designs are incredibly popular. I would think that her financial success would come in spite of her lack of business skills.

I would say, though, you have to give her and her devoted team credit for their perseverance. Her entourage consists of her mother, a male knitter, an administrative assistant and a few other employees who obviously believe in Ashley and her swimwear. After watching the show, I realized the title Bikini or Bust had nothing to do with the bustline of the garments or women who wear the suits, but rather “going bust”. She either had to produce her bikinis for the fashion show or go bust.

Other than showing the knitter for a short period, the show did not really talk much about the process of making the suits or even the suits themselves. One thing that was interesting was the use of real vintage materials that were sourced from clothes on the racks at a neighbourhood thrift shop. And although I found the show to be somewhat boring, I will continue to watch so I can hopefully gain more insight into the bathing suits themselves.

Photos in this post thanks to Beachwear.cc which has an excellent post about the Ashley Paige Swimwear 2008 collection!