So it seems large knockers are still all the rage.  But instead of running out to that creepy plastic surgeon in Mexico that will give you 50 percent off the surgery, there are three new bras out on the market that could give you the illusion of larger breasts in a safe and fast manner.

One of the options is the new “Miraculous Push-up” by Victoria’s Secret. Not only does it instantly add two cup sizes to the breasts, VS also says the contrast will give the illusion of a smaller waist. The bra comes with convertible straps, so it can be worn under strapless, backless and halter dresses.

A second option is Ultimo’s new “Day-Night Bra,” which also claims to add two cup sizes in seconds. The bra comes with two insertable silicone pouches that can be removed during the day while you’re at work, and then put back in later if you’re headed out and want that extra volume.

I wish I had more information for you guys on this third option, but I couldn’t find out who this bra’s maker is. I do, however, have a video illustrating exactly what this inflatable bra does and how you can increase your cup size into a B, C or D by the mere push of a button. According to some people on the Internet who speak a bit of Mandarin, the bra is called “She’s Mine” and it uses an advanced Japanese-developed technology, which they call “God’s hand,” to function.

A new spring, a new collection by Belgian label Marie Jo! Although not a huge name for some of our US-based readers, the label has an extremely strong reputation in Europe – and as I’ve just seen this collection from up close I can guarantee that it’s another excellent line, with some new designs including an excellent new Push-Up bra!

The Marie Jo people have been getting requests for push-ups for years, and they’ve finally been able to come up with a design they feel is up to the label’s standards. I’ve tested it, and loved it! It’s available up to an E-cup too, which is good news for the busty ladies out there!

The photos are extremely convincing if you ask me. I’ll vouch for the quality myself. 🙂

The whole collection is right here on MarieJo.com!

Popular U.S. department store Express is trying out intimates at select locations.  A few years back, Express had a great, affordable collection of basic panties that rivaled Victoria’s Secret’s 5 for $25.  After a while, I didn’t recall seeing them, but now, in its place, is a comprehensive lingerie collection including 4 bra silhouettes, 5 styles of panties, and coordinated sets.With prices ranging from $28 – $32, bras come in convertible, plunge, push-up, and t-shirt silhouettes.  Sizes range from 32A – 36D and are available in an assortment of colors.  Bras can be mixed and matched with the numerous panty styles.

Panty styles include bikini, boyshort, cheeky, hipster, and thong in cotton, mesh, or lace.  Choose from a variety of patterns, prints, and solids.  Prices for panties range from $7.50 to $10.50, but are also available 5 for $25 or 3 for $24 depending on the style.

I plan on trying a few pairs out to see how they compare to my staple favorites – Commando, Cosabella, Honeydew, and Hanky Panky!  Many of the panty styles resemble these popular department store and boutique brands.  I’m also interested in hearing about the quality and fit of the bras as compared to other brands.  They are out of my size range so I’d love to hear about your experiences.  Please share in our forums.  I’m looking forward to hearing your opinions.

“Reinvent the days of the Moulin Rouge with this vivacious collection. Beautiful Leaver’s lace creates a sensual look that is both feminine and playfully teasing. Delicate straps and bow accents are both sweet and sexy.”

Lou Lingerie, a popular French brand in existence for over 60 years, is taking a new direction for fall with a more sophisticated and modern look. With a focus on elegance and style along with quality and fit, Lou seeks to meet the need of the everyday woman who enjoys the finer things in life for herself.The line features feminine and fashion forward designs as well as well as basics with flair! Each piece in the collection is well thought out and includes incredible detailing from embroidery to creative use of texture.

One of my favorite groups in the collection is Charmant. Both the bras (full cup, demi, and push-up) and the panties (bikini, thong, and lace short) incorporate a unique, corset-esque lace up detailing. This sexiness is balanced with sweetness with delicate bows adorning the pieces as well. 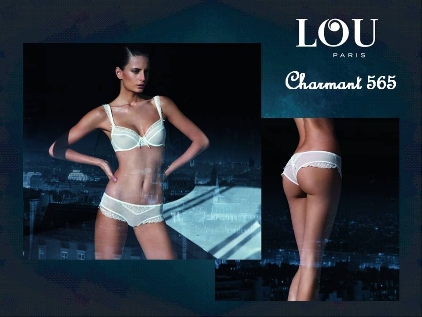 Couture is a one-of-a-kind group that is couture indeed! Each piece, a combination of silk and lace, looks like a work of art! This, paired with scalloped edging and rich colors, makes for quite a masterpiece. 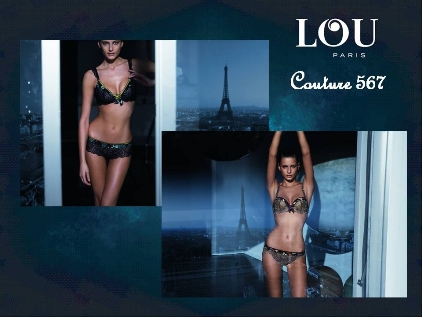 Allure, Lou’s basic bra, is more than basic. Featuring molded foam cups that conform to your original shape, this classic bra is accented with Swarovski crystals. 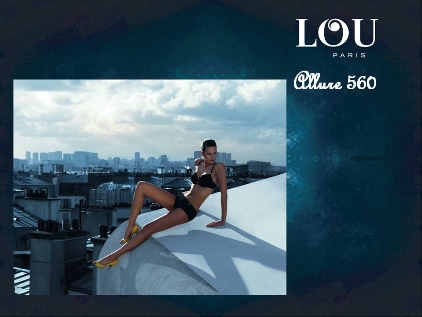 Lou Lingerie can be found at a number of retailers worldwide. Look for these and a number of other sassy styles online at Figleaves and BiggerBras.com.