Hopefully if you are reading TLP, you don’t need an underwear makeover! But if you do, be sure to check out Freshpair’s National Underwear Day Underwear Makeover competition. Create a video explaining why you need or deserve a brand new underwear wardrobe worth $400, and you’ll be entered to win. Click here for details.

Remember when we told you that Freshpair.com would be celebrating National Underwear Day all month long? As part of the festivities, Freshpair.com is giving away a $50 gift certificate to one very lucky reader of The Lingerie Post! I know I’ve got your attention now – here’s how to enter: go to Freshpair.com and pick out your favorite pair of panties. Need some inspiration? Check out Freshpair’s Staff Picks page. Once you have picked your style, just leave a comment on this post with either a link to the panties, or the name of the style. The last day to enter is August 31st – after that, a random winner will be picked and the gift certificate will be on its way. (Be sure to leave a valid email address, because that is how we’ll be contacting you!)

Before you enter, check out all the official rules right here – sorry, US residents only. Only one entry per person. Also: keep in mind comments are moderated – they might take a couple hours to show up!

Freshpair.com has been celebrating National Underwear Day for the past six years (see our archives for past coverage!).

The the seventh year, the National Underwear Day celebrations are a little different. They have moved online so all of us can join in the fun (not only the lucky lingerie lovers in NYC)! There will be underwear contests, huge sales, and giveaways sponsored by 2(x)ist, Calvin Klein Underwear, Diesel, Wacoal, and Natori all throughout the month of August. Over twenty brands will participate in exclusive events in celebration of the day.

“We realized that we were not being true to our loyal and growing customer base by just having a New York City presence. Our world is the internet and therefore we felt that we had to make National Underwear Day a National event by taking it online.”

We’ll keep you updated on the National Underwear Day celebrations!

Online retailer Freshpair.com (of National Underwear Day acclaim) wants to hear from you!  Simply email your favorite style of underwear (bikini, boyshort, thong, etc.) to contest@freshpair.com by next Thursday, November 20th. One lucky entrant will win a gift bag filled with panties, shapewear, socks, and more!  After you enter, head over to Freshpair and check out their wide selection of all of your favorite brands from Cosabella and Chantelle to Fayreform and Maidenform and more.  Don’t forget to get 10% off by using the coupon code listed below.  For complete contest rules, click here. Good luck! 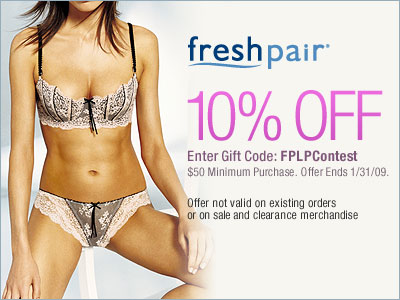 It’s that time of year again! That time when we celebrate what we wear underneath. The garments that lift, separate, support, shape, conceal, and cover. Those pieces that keep all of us here at TLP busy writing! It’s National Underwear Day!

This doesn’t mean that you still can’t celebrate! Whether you are in New York or New Delhi, South Dakota or South America, you can do something to honor your undergarments. Here are some suggestions:

I wouldn’t recommend performing your own runway show, unless, of course, it is behind closed doors. 😉 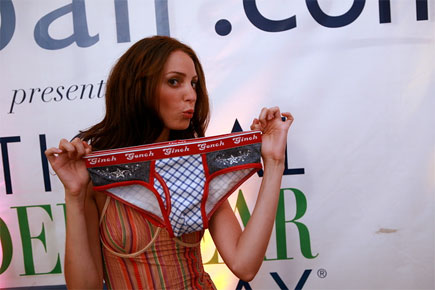