We just saw on What Katie Did’s blog that Victoria Beckham is wearing a WKD bullet bra in the opening page of a fashion spread in this month’s Harper’s Bazaar. This is the first time the brand has appeared in a Harper’s editorial – congratulations, What Katie Did!

It looks like the bra Victoria is wearing is the same one we featured in our recent article about the “pointy bra” trend – here’s the link if you want to purchase one for yourself.

Back in October, Kelly notified us of the pending partnership between Victoria Beckham and Armani. Now — the first results have arrived!

Former Spice Girl Victoria Beckham is rumoured to have gotten over 15 million dollars for a 3-year deal with Armani Underwear.

Are these photos worth the money? I’ll leave that up to you to decide — but I think the 34-year old mother looks absolutely gorgeous. 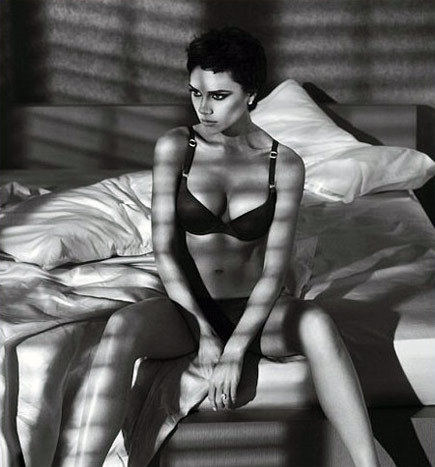 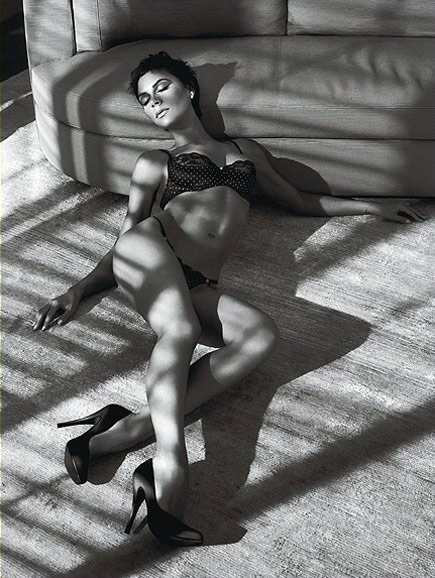 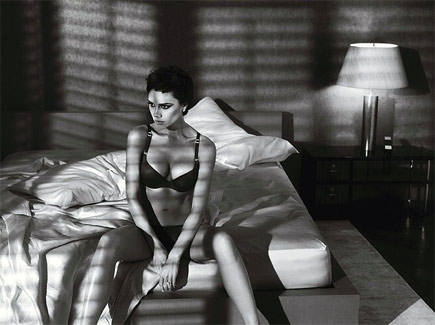 David Beckham has been modeling for Giorgio Armani for a while, and his wife has just joined him with a multimillion pound deal of her own to advertise Armani lingerie! Victoria Beckham posed for her first photo shoot on Wednesday in Malibu, California after signing the three-year, £12million contract. The pictures were shot by Mert Alas and Marcus Piggott, who were also the photographers to take pictures of David for his campaign earlier this year. These new photos will start appearing in posters and magazine ads in early 2009 for the new spring/summer collection.

Armani said of the decision,

“Who better than Victoria Beckham to launch our new global Emporio Armani underwear campaign?…Victoria is a style icon, a dynamic lady whose influence and recognition will add great excitement to the continued international growth of our Emporio Armani women’s underwear business.”

The night of the photoshoot, Victoria said, “To be given this opportunity to work with Armani is thrilling. I have so much respect for him.”

A source close to the Beckhams has said of Victoria’s decision,

“Victoria is very much aware there is a limited shelf life for any woman as to how long they can model, let alone model underwear…She is over the moon and extremely flattered to be the face and body of such a high-profile advertising campaign…Victoria adored David’s underwear campaign, not least because it was quite raunchy…She always used to laugh with her girlie pals about David’s bulging packet on bill-boards and how proud she was. So she just jumped at the chance to follow suit and be involved in a similar campaign – and it will probably be just as sexy…David can’t wait to see the first shots of his wife in her undies.”

We’ll let you know when the ads start rolling out!

Recently in our forums, the question was posed, â€œHow do you feel about headlights?â€. There are differing opinions, some of which vary with celebrity status, about how appropriate (or not appropriate) it is to â€œshine through.â€ (My advice – No. It is not okay to pull a â€œVictoria Beckhamâ€ at work.)

Despite the varied opinions, I think we can all agree that there are times where a little modesty is necessary. Mandolina posted about the fun-shaped and ever so stylish Bristols 6 nippies not too long ago. Looking for another option? Try Low Beams. These innovative nipple concealers, created by the Commandos people (my favorite!), are latex-free and contain an â€œouch-lessâ€ center. Humorously sold on key rings, they can be worn with or without a bra and even under bathing suits! At 5 pairs for $10, itâ€™s a steal!

Headlights not a problem, but need a littleâ€¦enhancement or perhaps a little push me up? Check out Takeouts and Cleavage Cupcakes for a less permanent enhancement option (which these fantastic folks call â€œthe better boob jobâ€). Keep your straps and hems in line with Matchsticks â€“ easy-to-transport double stick tape strips that maintain your modestyâ€¦when you want to!

Find the entire collection on the Her Look site as well as Shopbop.com and Lisa Kline.

Donâ€™t forget to join us in the forums and share your opinions. Because to shine or not to shine, that is the question!

Remember last november? Quite a few websites reported an alliance between Victoria Beckham and Jennifer Lopez: they would soon be creating a brand new lingerie line. Today, I found out (yes, it’s all unofficial and gossip, I know) the two celebs have decided to push these plans far far away into the future. To make a long story short: there will probably never be

It’s not that these girls don’t get along anymore after Victoria’s somewhat unfortunate words about J-Lo’s bum. Last week Safw News reported about them starting a book club (go figure) together.

A more realistic reason for the lingerie line to get out of the interest of Victoria and J-Lo are Victoria’s ambitious children’s clothing line plans (together with Katie Holmes, according to the streets 😉 ).

(Just for the record: I’m seriously hoping this J-Lo and Becks thing does result in some lingerie… Let’s hope for a miracle 😉 )