Even though I realise this is quite the provocative title

I just wanted to give you the heads up about a rhinestone-outlined bra and G-string set I found on the net for close to no money. Dimout.com (I’ve never tried this website before, so if you decide to give it a go, please let me know how they were) has this very pretty looking set on sale for just $11.69. That’s $11.69 for both the bra and the g-string. There’s no risk there, right (keep in mind the $4.95 shipping costs, though!)?

Anyway, they have some more really really low budget pieces who I’m sure are limited quality-wise, but hey, if it’s this cheap the looks are all that counts…

Earlier this week we had a question on our forums about the Discover Mademoiselle Desire set.

If only I would have known Knickers R Us would be having a sale this week, I would have been able to help Macella even better 🙁

Anyway, like I said, a Knickers R Us sale! They’ve got Discover Mademoiselle pieces in all sizes at 50% discounts (the desire padded bra is only Â£12 at the moment!)

– and they also have a continuous free g-string with orders over Â£20 offer.

The Knickers R Us shop has lingerie from Lepel, Sloggi, Discover Mademoiselle and Triumph on their website, which is very much worth checking out. They also have the new Sloggi Hot Summer range, an affordable everyday solution for this year’s hot summer months. 😉

All the info is on their website. Happy shopping!

Sometimes, a book appears that makes history, a book that is still read 2600 years after the author’s death. This is what happened with Sun Tzu’s Art of War, one of the oldest and most famous strategy studies ever written, and one of the most influential too (from Napoleon to the Desert Strom Campaign). Aubade is doing the same thing in the lingerie world with their Aubade Lessons.

French lingerie brand Aubade has always been well-known for being pioneers in the world of lingerie. From the strapless bra to the now essential g-string many products have been released thanks to their innovations and discoveries. And this mentality is also applied in the ad campaigns. Amongst these campaigns there is one that stand out on one’s own: The Lessons of Seduction.

These lessons started in 1993 as a way to show the new Aubade collections. In each one short advices was given to make your parner fall at your feet.

They called famous photographers like Bernar MatussiÃ¨re, HervÃ¨ Bruhat, HervÃ¨ Lewis and Michel Perez to capture the essence of the Aubade woman: feminine, classy and elegant but at the same time bold, daring and playful. The absence of the model’s face is other characteristic of the Aubade lessons so it’s easier for a woman to feel identified with the model in the picture and the black and white pict

ures gives to each lesson an almost magic and romantic look that emphasizes the feeling of Aubade as a luxury brand.

Fourteen years and eighty lessons have passed. During this time things have changed and this is also captured in the lessons. Recently, Aubade released underwear garment for men and male models appeared in the lessons. In these lessons, romanticism is combined with passion providing the picture with sensuality and magnetism. Aubade has developed a delicious method to show their collection and I hope this will last long for the sake of those who love lingerie and art. 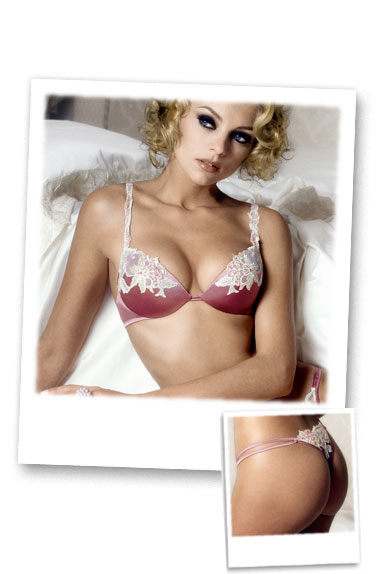 Check out this amazing Cotton Club Titanic set. We found these photo’s at Silkstorm, and can only say: check out there online store. It’s full of great lingerie! This Titanic set includes a Silk Plunge Bra with cream lace detail and a matching G-String with twin side straps. We love it!