Every once in a while, we’ll have someone write a story FOR us. Why? Because they have something amazing to say. Here’s news from What Katie Did‘s Katie Halford:

At What Katie Did we’ve always worked from vintage patterns (40s to early 60s) but bras were causing us a problem as most women today prefer an underwired bra as they believe they give more support (tell that to our 38DD bullet bra customer who wears hers to her step class as it’s better than a sports bra – luckily she hasn’t had anyone’s eye out yet!) By keeping to soft cup bras we really were limiting our customer base.

Over the years we had tried to do underwired bras, but they just looked to modern: What Katie Did customers really do like things to be authentically correct and there’s no way we could present them with a underwired bra that looked the same as any other on the high street. The problem we had was that underwired bras were very rare in the 1940s and 1950s. The only wiring bras seemed to have were ‘overwires’ which were commonly used in strapless bras, or boning vertically over the breast for bustiers.

It wasn’t until last year that I found a couple of 1950s underwired bras in Portobello Road’s market. They were made in France and date back to the 1950s. Perfect!

Of course, some amendments had to be made. In the 1950s the shoulder straps of bras were positioned much further in towards the body (which can be seen clearly in the photograph), we positioned them an inch further out so they’re more aesthetically pleasing. The second main amendment was the underwiring. I wish I could show you this: the whole of the front of the bra’s underwiring is welded together in one piece! Sure, it does bend to mold to the body, but you could inflict serious damage on someone with it if you so desired! We plumped for modern underwiring, although the underwiring used is generally used for basques and comes up higher in the centre of the bust. Finally, the original version had non stretch straps: we’ve changed these to modern adjustable straps to make the bra more wearable.

So now we have to wait and see what happens. Our underwired bra, as part of our Cabaret lingerie range, will be launched in mid September (rrp Â£32.50).

Autumn/Winter 2007 looks like being the most decadent What Katie Did season yet. They’ve looked to 1930s Berlin for inspiration with luxurious fabrics including velvet and organza — resulting in beautiful vintage corsets that will pretty much dazzle any warm-blooded creature. All the “What Katie Did”-corsets are handmade by one corsetier from start to finish, are spiral steel boned and designed to skim up to 4 inches from the waistline. Retail prices are to be between Â£125 and Â£200 (that’s $250/$400).

What Katie Did haven’t designed an underwired bra before as they were very rare in the 1940s and 1950s, however, Katie Halford found a couture sample dating back to the 1950s and couldn’t help but be inspired… The extremely burlesque-like (I’m saying this in a good way) pieces we’re seeing today are called Cabaret Lingerie by Katie. I can see why. 😉

Popular French brand Chantelle will be launching a new multimillion-dollar advertising and marketing campaign featuring classic beauty Stephanie Seymour. Black and white images entitled, “Beyond Beauty,” will feature the 40 year old mother of four this September. Chantelle seeks to cement its image as a brand that reflects a spirit and style that focuses on making women feel beautiful.

Also, just in time for Holiday 2007 – 2008, Frederick’s of Hollywood will also have a new ‘it’ girl. None other than burlesque star Dita Von Teese!

We will keep you posted on any developments in reference to these ads. I’m sure they will be quite interesting…

Lewes East Sussex based boutique Oyster Lingerie, a true luxury lingerie store, has just launched a brand new web shop! The key words at Oyster Lingerie are clearly luxury, burlesque, selection and intimacy, and the pieces they’ve added to their online store are true (yet obviously not cheap) beauties by designers such as Madame V, Ayten Gasson, Myla, Ophelia Fancy, Spoylt and What Katie Did!

You really should check the oysterlingerie.co.uk website yourself — as there’s so much more to find on there. The photo’s below are from a recent photoshoot done at the boutique, and it all just looks…. GREAT! 😀 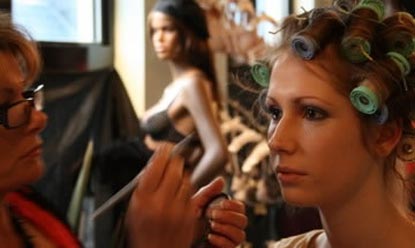 I’m not sure whether or not Oyster Lingerie is planning on expanding their online range, but let’s hope so, because their taste in decadent pieces looks extremely exciting!

A quick blurb about the new Angels Carrying Savage Weapons skirts that just arrived at the great La Magia lingerie site! The skirts are designed to match their sexy corsets, but they look great on their own as well…

From the La Magia Blog:

“Each is hand made to order from the finest Duchess Satin and you simply cannot find more beautiful skirts, they ooze glamour and sophistication and will be the perfect addition to your wardrobe. Teamed with a pair of stockings, heels and a divine corset you will be dressed to kill!”

Price tags from Â£70 for the Jezebel skirt to Â£110 for the Burlesque one. It’s not cheap, but it sure is high class! Enjoy the photo’s, and check the ACSW range at La Magia too!