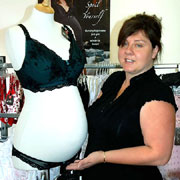 The creators of the fashionable maternity lingerie line HOTmilk have just been recognized with two women’s business awards. Lisa Ebbing and Ange Crosbie won “Best New Business” and “Best Micro Business” at the Bloom Her Business Conference and Awards.

My guess is that plenty of women who voted on the winners remember the bland lingerie options facing them when they were pregnant – the experience that first prompted Ebbing to create HOTmilk. The label is now stocked in over 300 boutiques worldwide, and you can also buy online from Figleaves UK.

Just a very quick update about a label we’ve been loving since day one — HotMilk! Figleaves is one of the biggest retailers on the globe, and their stocklist is ever expanding, now with the savvy pregnancy-lingerie brand.

Want to know more about HOTmilk? Check out our coverage:

HOTmilk, an enduring TLP favorite, now has a new range! The “Whisper Sweet Wickedness” black and cream lace bra and panty set is sexy and luxurious, but the real stars are the “Ruffle My Feathers” camisole and “Slip Into Seduction” nightie! Rare in the maternity lingerie world, the steamy microfibre camisole has shelf support and one-handed nursing clasps. The slinky nightie shares these features, and is a dream come true for new mothers who want to look fabulous in their slumber but still be able to nurse when their baby inevitably wakes them up crying for a midnight snack!

The range will be available very soon (mid-December) so this is a great last-minute Christmas present for the beloved new mom or mom-to-be in your life!

Sexy mothers-to-be must be sure to sign up for a chance to win our HOTmilk maternity and nursing lingerie giveaway! Four lucky readers will win their choice of the sassy sets made by one of the fastest-growing (and most popular) maternity lingerie lines around. All you have to do to win is sign up on our forums and

tell us which set you want to win!

Be sure to tell all the beautiful pregnant women in your life (or sign up yourself and surprise her with a gorgeous set!) Click the banner on our homepage to see more information about how to enter and to learn more about HOTmilk. Hurry, the competition will be closed September 4, 2007!