Back in November, Mandolina told us all about the Pussycat Dolls lingerie line, shhh, available at La Senza.  Now, this line is available at Bebe stores in the U.S.  I was walking through Bebe last week when I noticed the familiar designs.  The designs are as great in person as they are in photos!

My favorites are the Shipwreck Collection in Yellow and the Lipstick Vintage in Pink.  The color combination of the yellow and green in Shipwreck is fresh and fun.  The ruffles add a coquettish touch and the anchor detailing on the front of the panty is just plain cute!  The Lipstick Vintage Tank is to die for!  From the front, it’s just another pretty tank, but from the back, a printed satin ribbon laces up and ties at the top.  Too cute!  Pair with your choice with g-string, thong, or hot short. 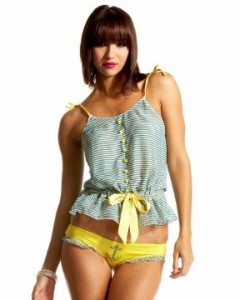 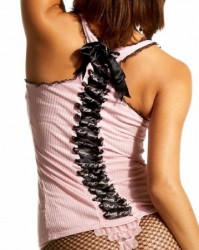 Check out the rest of the collection on the Bebe site and find your favorites.  Also, check out La Senza for styles as well. 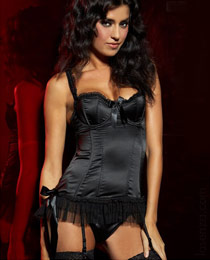 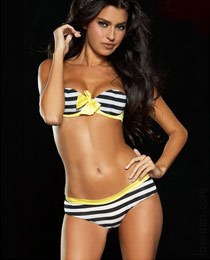 You can browse all the pirces of the collection on the La Senza site — which also has a contest running allowing two lucky fans a backstage pass at a Pussycat Dolls concert. 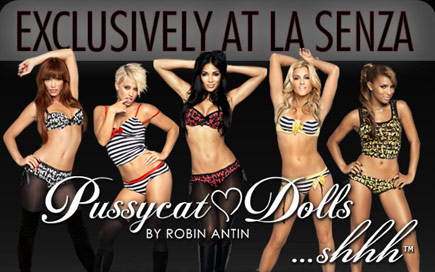 Found some videos of the Pussycat Dolls shhh Lingerie catwalk show we mentioned on TLP before. Turned it into a quick blurb.

It is no surprise that Sean Puffy Combs showed up for L.A. Fashion Week. His career is similar to Robin Antin, the woman behind the Pussycat Dolls. Since 1995, PCD has grown from a modern day burlesque troupe to a recording star. PCD even has a reality TV show. Antin is a busy woman controlling and overseeing all of the PR for PCD. Her most recent idea? Lingerie. It is hard to not think of the old sportscaster joke about “I went to a fight last night and a hockey game broke out.”

So, L.A. Fashion Week closed with a lingerie show and it somehow morphed into a Pussycat Dolls live event. Shocking. Robin isn’t opposed to promoting herself as is evident by the tag line “Pussycat Dolls, by Robin Antin”.

“The lingerie line was inspired by punk-rock music and old-fashioned pinup girls”, Antin said. She called it “shhh” because it’s “our little secret.” “What we’re wearing under our clothes is our little secret,” she said. “It’s something that every woman shares.” With such a broad influence, trying to pinpoint a signature style is difficult. The lingerie paraded on the runway included micro skirts, dangling suspenders, lace, sailor stripes, hoodies, prints, and graffiti.

Strangely, even with a splashy debut, I’m not sure where “shhh” is being sold. It doesn’t seem to be part of the line up for shhhlingerie.co.uk, but I’m guessing they’ll benefit from some increased traffic to their site.