Over 80 artists and quilters from upstate NY participated in a breast cancer awareness project where they had to creatively embellish 100 bras that were donated by Maidenform to raise money for the American Cancer Society and Encore Plus. After being judged for various categories, the winning entries were finally announced this week. 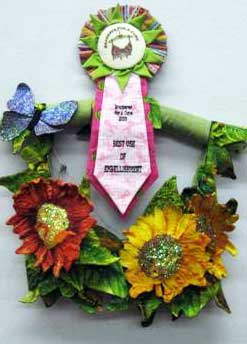 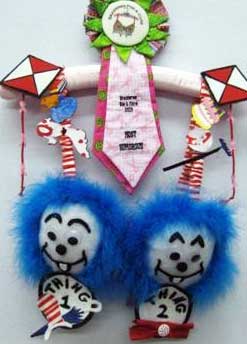 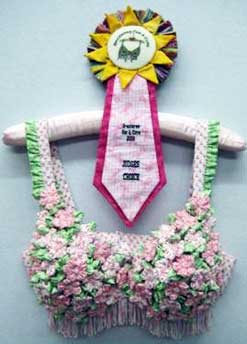 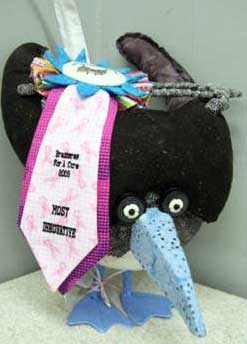 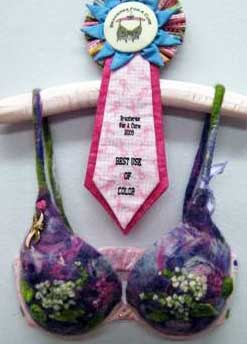 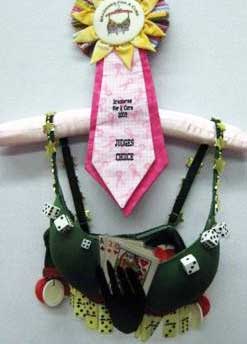 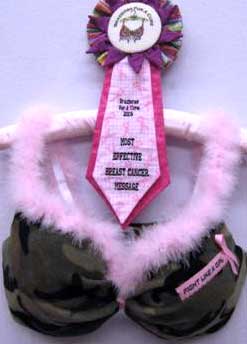 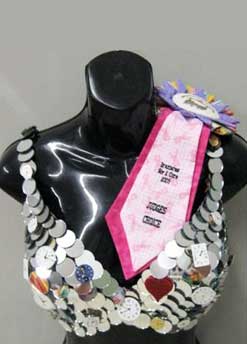 The wacky entries were judged by a panel of three to determine the winners for the following categories:

Most Innovative – “Blue-footed Boobie”
Best Use of Embellishment – “Lady Big, Lady Bug, Fly Away Home…”
Best Use of Color – “Lilacs for Mom”
Most Effective Breast Cancer Message – “Fight Like A Girl”
Most Humorous – “Thing 1 and Thing 2”

Through sponsorship from The Common Threads Quilters Guild of Vestal, NY, the uniquely decorative bras will be on display at several locations around the upstate NY area through November, and will then be auctioned off at the final reception.

Check out www.Brazieres4aCure.blogspot.com for the full schedule of events and exhibitions. 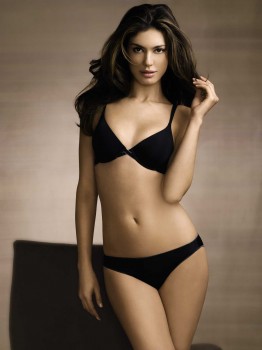 Tired of that pang of guilt you get when shopping for anything lately? Even buying everyday essentials can be a burden on the budget…

Luckily, Maidenform is making things easier on us with by offering a guilt-free, high-quality solution this season with the launch of One Fabulous Fit™ Decadence; it’s the newest collection of ultimately indulgent, affordable, every day bras. At $34, it’s a great every-day solution and knowing Maidenform’s quality reputation – it’ll last – something I believe is real budget-shopping.

Fashioned from some of the softest fabrics known to women, Maidenform claims “Decadence bras are not only redefining comfort, but redefining your everyday lifestyle!” That might be a bit much, but for sure it’s a great buy! From designer straps and hooks, to plush pads and fabric, it sure is a great everyday essential. 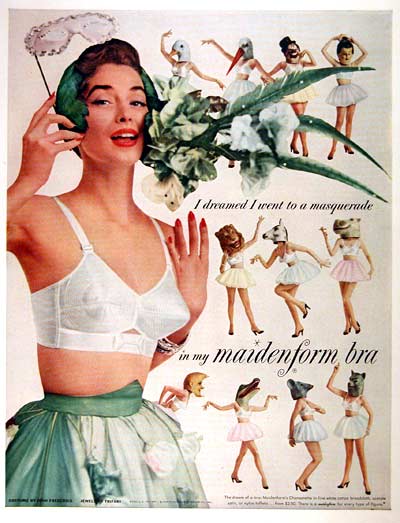 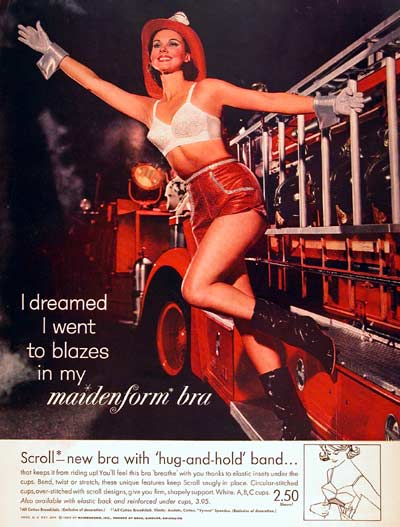 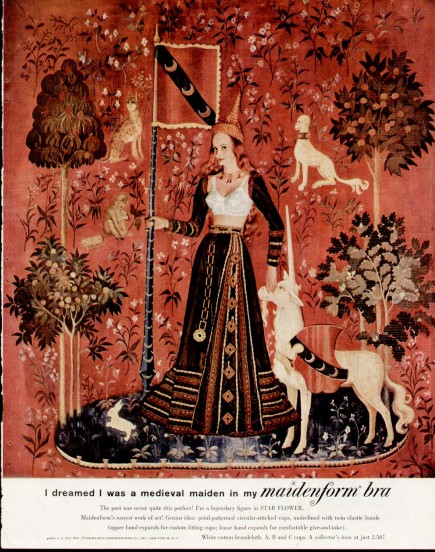 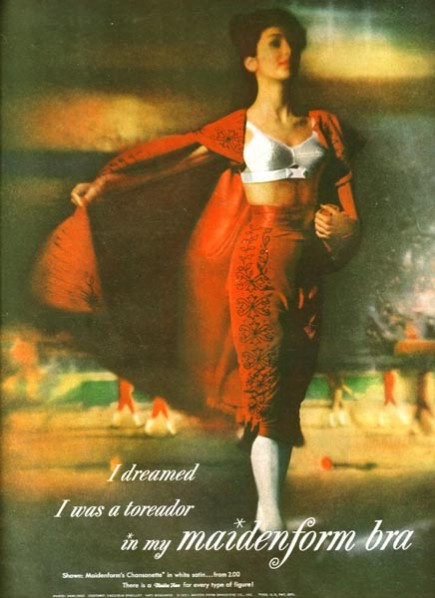 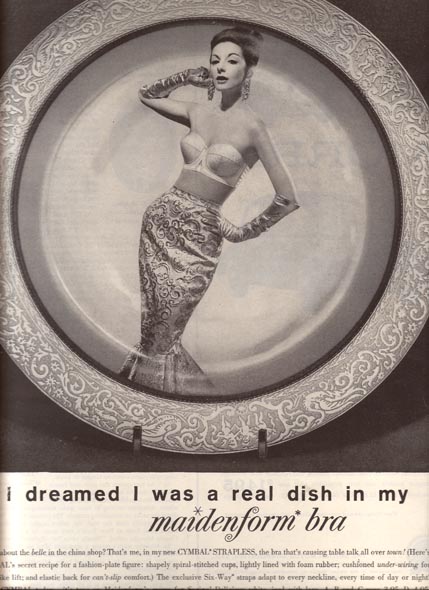 Of course, the first thing to do would be to look through any old magazines you, your mother, or your grandmother have. If you can’t find any ads there, these prints and original ads can be easily found online. A quick Internet search will help you find several sellers, and eBay has many of these ads for as little as $4 (at time of writing).

a Texas girl is the grand prize winner of a photography contest sponsored by Maidenform and MySpace. After entering the Maidenform “This Looks Right” photo contest on MySpace, Jessica Degollado won $20,000 and the opportunity to go behind the lens at an upcoming Maidenform photo shoot. 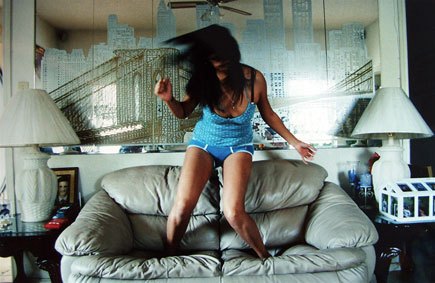 The winning photo is a self-portrait that depicts Degollado dancing on a couch in a tank top and boyshorts. Her caption was, “This feels right because the photo is the perfect example of being free, young, and being yourself. FREEDOM feels right, and is something we all want. And being yourself is something we should all be, rather than doing what everyone else is doing.”

TLP sat down for a quick chat with Jessica which resulted in a quick mini-interview! 😀

Q: How did you end up sending in your winning photo?
A: I was on MySpace one day, and saw the advertisement for the contest on the main page. I decided to give it a shot, since photography is my life. So I entered the contest and hoped that I would win.

Q: Do you often walk around the house in your underwear?
A: I do, actually, but only when I’m alone in the house. When I lived in Chicago, I’d do it a lot in my apartment. That always reminded me of Charlotte (Scarlett Johansson’s character) in Lost in Translation, and how she would always be in her underwear in her apartment in Japan.

Q: Would you call yourself a real lingerista?
A: I’d say so. I’ve always loved buying lingerie…but especially underwear. I absolutely love underwear.

I got the following press release in my mailbox a couple days ago and I have to say this looks very promising:

Summer is upon us and women across the country have

been working endlessly to get their bods beach ready. But how do women keep the motivation through the fall season? In this critical time, confidence is key to keeping women motivated and committed to their workout routines.

In order to get the most out of their workouts, full-busted women seek a sports bra that bans the bounce while working out. Luckily, full-figured bra designer Lilyette® has the answer! The new Lilyette® in Motion™ sports bra collection launches today and offers full -busted women everywhere a solution. To help launch the new collection, Brooke Burke is lending her support to the campaign to spread the word.

bras will be sure to keep the girls in check, while still looking good. Two encapsulating cups keeps the chest separated and prevents the dreadful uni-boob. And if that isn’t enough, the collection offers both wire and wire-free styles in three different levels of support specifically geared towards various levels of activity. So whether striking the downward dog yoga pose or dishing out a powerful serve, Lilyette® has you covered.

“I am so excited to be working with Lilyette® on this launch. Finally there is something comfortable and supportive for those of us who need it” says Brooke Burke. “I work hard to keep my body in top condition, and I understand the importance of finding a sports bra that supports you during a workout. Lilyette® in Motion™ delivers the comfort and support fuller busted women need to get the most out of their fitness routine.”

The collection offers three different levels of support depending on the level of activity. As with all Lilyette? bras, they are guaranteed to deliver the ultimate in everyday comfort and support, contemporary style and fabulous fit.

“We are so excited to be able to provide today’s full-figured woman with a sports bra collection that truly understands ‘impact’,” says Norah Alberto, Maidenform’s Senior Style Director. “We know the importance of fitness and everyday activity today’s women seek, but understand that each person’s pursuit may not be on the same playing field. The Lilyette® In Motion™ collection exists to deliver a bra for our full-figured woman that meets all of her needs. So whether she is out on a walk with friends, or participating in a high-impact aerobics class, this new collection by Lilyette® delivers the fit and flexibility she’ll need to get her through her activity comfortably with the utmost support.”