For new moms it can be exceptionally difficult to find nursing bras that fit comfortably. The changing shape and size of the breast during pregnancy means that a custom fit bra is recommended to ensure optimal support. This is important during the nursing stage as a great bra will provide optimal neck and shoulder comfort for the new mom as well as providing convenient access for breast feeding. And now new moms across Vancouver, North Vancouver, Richmond, and White Rock can find that stylish, great-fitting bra through the team at Bare Basics Lingerie.

With their fitting services and great selection of nursing bras, Bare Basics Lingerie is now the ideal resource for new moms looking for comfortable, stylish undergarments. The fitters at Bare Basics Lingerie have been trained so well that they’re able to take a quick glance at the client’s body to determine their exact bra size. They communicate directly with the client to determine their preferred style, whether it’s that elegant lace bra or a comfortable molded piece that rests smoothly against the skin. Then, utilizing their experience and fitting knowledge, they determine the size of bra the client should be wearing and bring in a selection of styles to suit their unique wearing needs. The expert in-house fitting specialist will then adjust the straps to meet the client’s comfort level. With the company’s exceptionally varied style selection, the perfect bra is ready and waiting to be discovered at Bare Basics Lingerie.

This year, Eve’s Apples Lingerie wants small-busted women to measure up! The online retailer introduces the “Size up the Web” campaign to ensure that small-busted women are properly fit for a bra. Wearing the wrong size bra isn’t just a full-cupped problem. According to Eve, traditional bra fitting systems aren’t as effective for women with smaller breasts.

“Most bra-measurement systems don’t take into account breast shape, tissue, and placement on the chest,” says Eve. “So women with small breasts often end up wearing ill fitting bras with cups that are too small and bands that are too big.”

“Our complimentary online bra fittings work for small-busted women of all body types – tall, short, broad or slim,” says Eve. “Women do their own measurements in the privacy of their home, then we review each submission personally and determine her true bra size based on all of the factors – not just chest circumferance and breast size.”

In the February 2011 issue of Cosmopolitan, Eve offered bra-fitting tips to help women flaunt smaller breasts. However, she recommends going through the online fitting because some shapes are especially challenging.

Customers have already responded well to this campaign. We hope that many more of you will take advantage of this great opportunity to find your perfect fit!

If you loved this post, why not stay connected with Eve on Twitter and Facebook. She is currently working on developing a patented bra-fitting system just for small-busted women that can be utilized without the help of a professional. How exciting! Stay tuned!

I really hope you are all in the right size bra – I think that comes as no surprise by now. 😉 We have a bra sizing guide here on TLP, but there is now a new app for your iPhone to help you if you don’t want to go it alone and can’t find a good fitter in your area. The Bra-Fitter app guides you to help you measure yourself correctly, then gives you the size your measurements would predict you wear – as well as a range of bra sizes that may fit you. Because as we know, bra sizing is not an exact science! It will help you convert your size into another country’s standards if you’re buying a foreign brand, and also demonstrates how a well-fitting bra should look. This sounds like a great tool to bring into the fitting room when you’re lingerie shopping!

Learn more about this app and find purchasing information on the Bra-Fitter website. I don’t have an iPhone so I haven’t had a chance to play with this yet myself – do any of you have it? Is it helpful?

We’ve shown you products, like Strappers, that pull your bra straps in to hold and hide them beneath racerback tops. Accessories like this are great to have in your closet to adjust your lingerie to work with your wardrobe. I just discovered Bra Barrettes, and they have to be the prettiest version I’ve seen of this type of product! And really, after you’ve spent so much time and care finding beautiful lingerie, it only seems right that if you use a bra strap holder, it should be pretty as well! Bra Barrettes come in several colors (clear, silver, black, or copper) and can be adorned with crystals and/or interchangeable charms. The charms are easy to switch out with the lobster-claw fastening. Bra Barrettes can be used to keep your straps hidden, whether on a bra, slip, or camisole. The Bra Barrette could also be used as an accessory to your spaghetti-strap tops and dresses if you want to show it off. 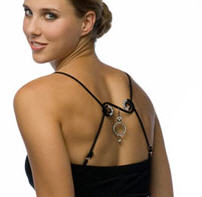 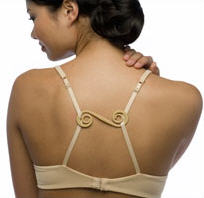 Interestingly, Lara Merriam-Smith, inventor of the Bra Barrette, has also founded BraStrapSolutions.com. This website provides links and overviews of many competing products, so you can find the best solution for your wardrobe problems.

Remember, if your bra straps are slipping, that could mean that you are having a common bra fitting issue that can be cured by making sure you are wearing the correct size. Slipping straps could mean that your band is too large or your straps are adjusted incorrectly. But if you have sloped shoulders, your bra straps could be slipping even if your bra is correctly sized, and in that case the Bra Barrette could become an everyday essential for you.

When I wrote about the importance of a sports bra last month, I mentioned that I’m a fan of Shock Absorber

bras, and that my bra size limits my selection. When people at Bendon Sport read that, they wanted to change my mind! Bendon sent me the Extreme Out High-Impact style, and asked me to try it instead of my Shock Absorber next time I hit the gym because it is specifically made for DD-G cups. I learned that Women’s Health brought a Bendon Sport bra (the Max Out style) on The Today Show in the US last year, where it was crowned “the Porsche of sports bras.” Bendon bras have been worn and tested by many high profile athletes, including the entire Australian netball team, and a variety of runners (including Allison Roe, the former marathon world record holder). So I have to admit, I had pretty high expectations for this bra before I even received it.

When I put the bra on, I noticed right away that it is very comfortable – there are no itchy seams or pinchy bits. There are tags on the band, but they are long and silky, so I didn’t even don’t even notice them. I actually was thinking that the bra was tagless until I specifically checked! I was very pleasantly surprised to see that that the Bendon Sport bra gave a very natural and seamless silhouette. It shaped my chest more like an everyday T-shirt bra than than a lumpy, unattractive sports bra. I know that the gym isn’t a fashion runway, but it was still nice to know that my assets looked their best! I went to the gym with my boyfriend that day, and even he commented on the difference and improvement my new bra made in my appearance. The fabric was light and quite breathable, so I was comfortable throughout my workout. Another happy surprise was when I found that the straps are convertible, so I had the option to wear them normally or to crisscross them – perfect for wearing underneath racerback workout tanks! It actually wouldn’t be so bad if the straps were to poke out a bit, however, as they are relatively slim (compared to some other fuller-figure sports bras) even though they were comfortably cushioned.

The only disappointing thing about the bra is that it doesn’t come in my size. I wear

a 30 band, but Bendon Sport’s size range begins at 32. I was optimistic when the bra came in a size 32, and wore it on the tightest hooks. But the Extreme Out bra seems to run true to size, and was just too big for me. I was comfortable in my yoga and Pilates classes, but an incorrect bra size is very apparent when you want to run on the treadmill! You guys know that I’m very particular about wearing well-fitting bras, so I will sadly have to retire mine. Don’t let that deter you, though – if you are within the size range of the Bendon Sport bras, I think they will work wonderfully for you. The sports bra is very high-quality, and has a sturdy three-row, three-column band to anchor firmly to you. I was also glad to see that the cups had comfortable foam-covered underwires for extra support, and busty ladies know how critical support is!

To get your own, you should act fast! Between now and Tuesday, February 24, Freshpair is offering 10% off all Bendon Sport items. Use the coupon code FPBENDON at the checkout. As always, if you have any more questions about this product, just leave a comment or make a post in our forums and I’ll be glad to help!