Although KGB came busting in on the bikini scene with a glaring theme of communism, it is not a Russian brand but rather, American from South Carolina. Oddly enough, the original Russian inspired theme appealed to many young people but mostly because they were too young to understand the historic negative significance. And while something as simplistic as a bikini does not usually coincide with politics, the KBG label moved Russian fashion into the forefront.

That was four years ago and 2008 brings a new theme of dirt bikes and Motocross racing. While most bikini labels aim to be the skimpiest or the sexiest or the boldest, KGB focuses on the image of young women being strong, determined, gutsy and knowing what they want accepting nothing less. Thus, Motocross biking was chosen as the theme because the sport is difficult, demanding and inspiring. The underlying notion is that young people should not give up and should aspire to achieve their goals and dreams.

The current collection is characterized by exciting, bold prints, huge metal adornments such as the side rings on the bikini bottoms, and precision cuts in the fabric to enhance and define the body. One thing that is very striking about this collection is the fact that the bikinis are not skimpy by most standards. The cuts of the legs of the bottoms provide ample coverage and the cuts on the tops are just enough to show a hint of breast.

Bikini tops come in bandeau, halter styling, string closures, bra tops with accent coloring bands and straps, keyhole center tops tied around the neck and long sash like ribbons tied at the back of the top. Aside from the black boots, the bike chains and bike tires that the models wear or carry, there is nothing rough and tough about this bikini collection. On the contrary, the colors are bright, upbeat and ready for the sunshine, the designs are elegant and modest, and the look is quite sexy and appealing.

Lastly, something should be mentioned about the brand’s history. K,G and B are actually the initials of the young woman behind the label. The daughter of Tara Grinna, Kirsti Grinna comes from a family of expert swimwear makers. Her mother Tara, well respected for her beautiful haute couture swimwear, and maternal grandmother, Eleanor Langley, established La Plage Swimwear. Tara went into partnership with her mother and her husband joined the business as well. It is therefore no surprise that Kirsti would launch her own bathing suit lines.

Wildblue is a young swimwear label designed by Alejandra Castillo, and focusing on high-end costumers looking for luxurious designs and fabrics. The fabrics, quality of the garments, and impeccable attention to detail are what make the pieces so popular. Wildblue has adopted the philosophy that

“swimwear is not just something you swim in but it is a venue to display your sense of fashion and for self expression”. We at TLP obviously support that philosophy! 😉

According to the designer — these are not just swimsuits, they are a fashion statement. wildblues collections greatly utilize animal prints, and metallics as a foundation. Alejandra enjoys utilizing animal print and metallics as she believes these prints speak to a womans inner being and reflect their inner strength and instinctual fierceness.

Wildblue swimwear recognizes that while the look of a bathing suit is important, fit is even more important. Alejandra Castillo strives to balance fit and design in all of her designs.

The 2008 Collection features one-pieces, bikinis and (the ever so popular) monokini. Accesories range from coconut shell details to rhinestones making the 2008 collection an entire venue of fashion and self expression at the beach. 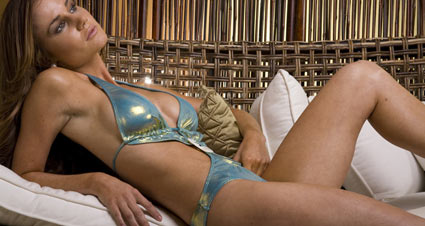 Wildblue swimwear is available in high end boutiques all over the US, USVI & Asia. Get Wildblue Swimwear online at www.wildblueswimwear.com.

The Tapwater Swimwear label is 100% new to me, and it looks like it’s new to the internet as well. I found these pieces on swimwearboutique.com and it’s the only online boutique I could find selling these… The brand describes itself there as follows:

“Our collections embody flattering, sexy, beautiful and colorful pieces that allow you to make a statement in and out of the water. We aspire to carry a reputation in the marketplace for developing and delivering an exceptional product. We can achieve this by using high quality, cutting edge fabrics and trims, having a close understanding of market trends and needs and ensuring that our product is distributed in a precise and efficient matter.”

I’m not too sure about the designs — they’re not really my cup of tea; but I suggest you make up your own mind! We’ve got a lot of pics thanks to swimwearboutique.com. 🙂

The beautiful Dutch supermodel Doutzen Kroes in a beautiful Calvin Klein bikini for the upcoming season. The bandeau is absolutely gorgeous — I love how the center clip manages to add a little ‘sexy’ to the sober look. Very pretty — just like Doutzen Kroes! 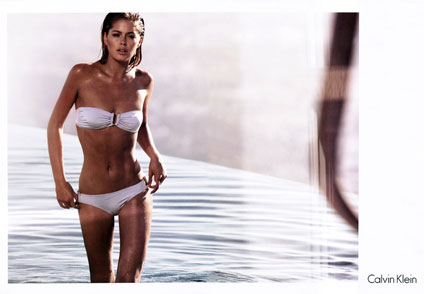 “Gipsy Heart”, the brand new swimwear collection designed by Jane Pain’s Patricia Salinas, is one of those beachwear collections that take some sinking in before you’re ready to judge… My first reaction was: “No way I’m wearing those fabrics and styles on the beach!”. Right now I’m thinking: “Where do I get that strapless swimsuit??!!”. Seriously, these pieces are gorgeous, and anything but average!

Patricia told us she’s trying to: “Show a girl that represents the well-defined Jane Pain style, literally going some place — and makes it hers.”

As always, Jane Pain worked together with some of the best local photographers and hairdressers/make up artists to create a story behind their collection. The location was a very typical “riverfront club” set in the 30’s — and the result is stunning. Patricia, you’ve done it again! Enjoy the photos!

More info, as always, on the Jane Pain website!