Regular bras worn underneath bulletproof police vests can cause substantial injury to policewomen if they are shot. The impact of the bullet pushes the wires, plastic pieces, and other hard materials in the fasteners of the bras to the point where a woman can be impaled or receive other serious injuries. 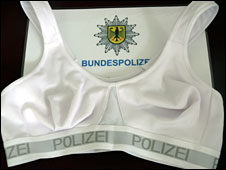 In an effort to reduce the risk associated with wearing everyday bras under police issued equipment, the German federal police force now offers several styles of safety bras for their female officers. Each officer may choose three from the selection as part of her uniform.

The new bras are not actually “bulletproof” as some are reporting. At least not in the same sense as the vests, but rather they are made without plastic and metal in order to avoid injury caused by the bra and not the bullet per se. Further, the bras are made of white cotton or polyester, are padded, and look very similar to a sports bra. The elastic band around the bottom of the bra is marked with the word “polizei”, police in German.

Since the bras have been issued, UK female officers through the Police Federation of England, have recently indicated that they want the same bras as standard issue in Britain.