The last time Triumph made off-the-wall earth-conscious lingerie, it was a bra that turned into a shopping bag. A nice idea, but who wants to give up her bra just to carry home some groceries? I personally am quite satisfied with my bras when they

make me feel sexy and look great. But if you demand a bit more (like, a hot breakfast), check out Triumph’s new solar-powered bra.The “Photovoltaic-Powered Bra” was unveiled in Japan on May 14.

The solar-powered lingerie boasts the ability to use the sun’s energy to power small appliances like a toaster or kettle. It contains a solar cell that generates electricity and dispenses it when a power cable is connected. The bra has a screen that displays messages when energy is being harnessed, and comes equipped with pads designed to hold your drinks so fewer cans and plastic bottles need to be used and thrown away.

The bra’s main goal is to boost environmental awareness, and will not be sold in stores anytime soon. Triumph spokeswoman Yoshiko Masuda said of this decision, “people usually can not go outside without wearing clothes over it.” That’s probably a good idea, as the bra cannot be washed or exposed to rain.

Yuko Ishida, who modeled the bra, said, “It is very comfortable and I can really feel involved in eco-friendly efforts as well.” 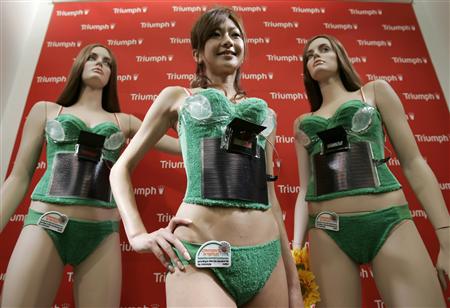